Our Story More about the dogs in the books

Hi, the first video shows all the friends of Arielle. Do you see the little ones? You know which kind of dogs they are and who their mother is? Their mother is a pit bull! Kitty! Their father is a maltese. Kitty likes small male dogs.

The white huge male is his majesty, Minú.

The second video always makes me sad. It is about Arielle before her spleen ruptured. She had cancer already and still only wanted to please and help people. When the vet at the boardig called Simba, the baby, and Simba could not care less, it was Arielle who came to not disappoint the vet.

But she ignored Arielle. She did not recognize her heart at all. Then came Simba, the baby, and she forgot about Arielle. My mother said: “This is the dog which was not stroked.”

I feel the same way, but worse.

Now, on 4th of December 2021, Simba died. Simba adored Arielle and loved her most. Arielle was her mother who had adopted her.

Simba had to die, still growing. I am convinced it was because of the fact that she had access to plastic with long threads at the dog boarding of the vet.

Simba had to be operated after having had horrible pain. She was vomitting blood and had bloody diarrea, only blood, she could not eat for days until they found out her intestines were cut off.

One meter of her intestines had to be taken out!

The operation took place in march 2021. Now, Simba died on her abdomen filled with blood.

Her pain must have been not to describe, and I do not understand why there was nobody at hand to bring her to the vet clinic on time, because the vet and owner of the boarding said when they – she and her husband who run the boarding – saw her, Simba was in a very bad state of health, and when they brought her to the clinic, she had already been dead.

When I saved Simba as a tiny baby from La Rioja, I cried. She was too beautiful and sweet to be true.

I did not understand how anybody could be so silly to throw her out of his or her life!

No wonder, she was brought up by a pit bull: Arielle, best dog ever.

Simba might not have lived long, but she will always be here with me and the ones who love her, just like her mother Arielle.

I know they are now playing in heaven where they belong to and did so from the start. They just visited the earth to show us there is paradise. 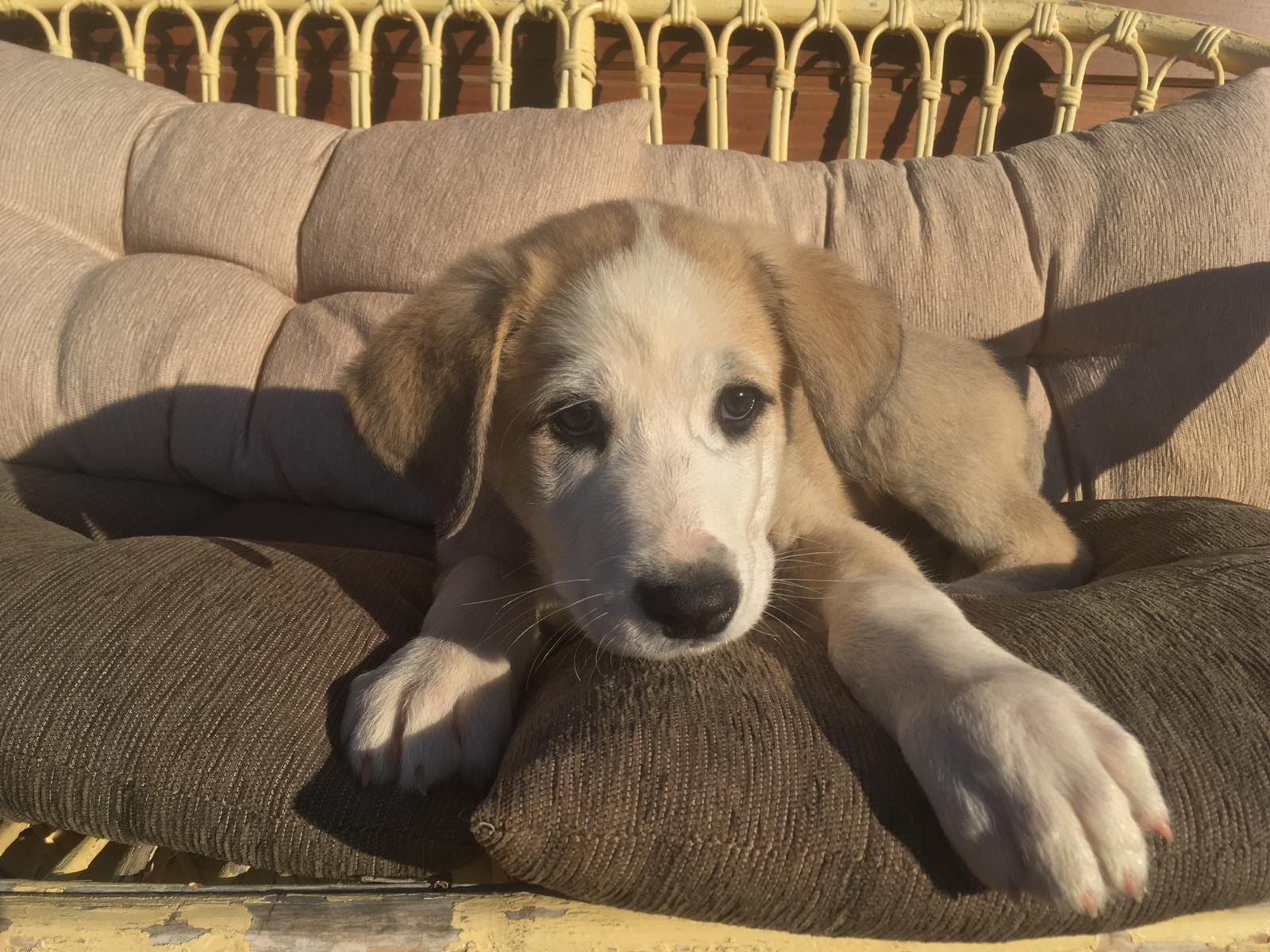 Angels Arielle and Simba, playing. Simba loved Arielle most. Arielle only took care of Simba, even when she was very sick she was concentrating on protecting her which was more important to Arielle than her life. 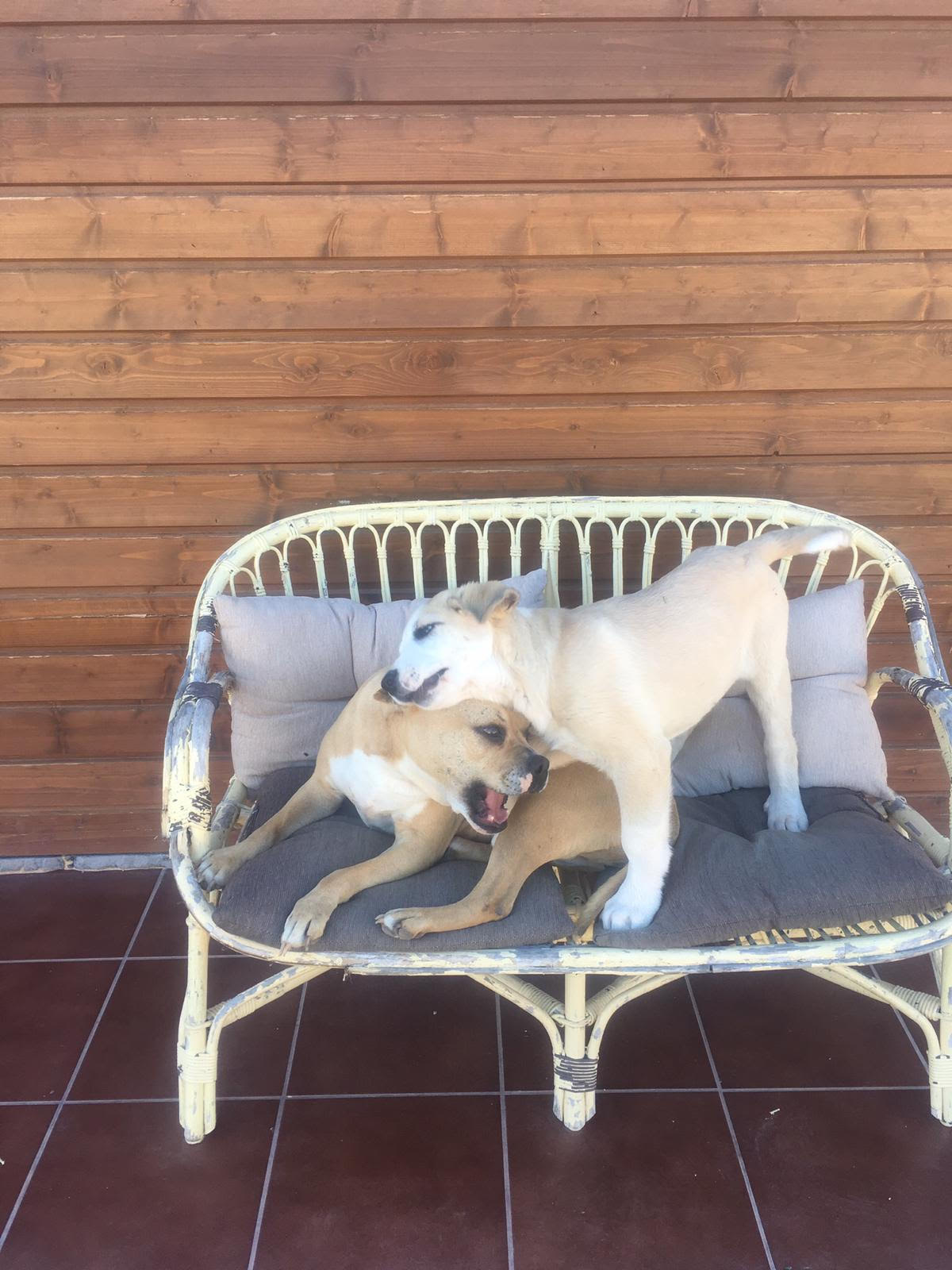 Kitty and her kids

I saved Kitty and six of her kids as well as a marvelous dog which shares the same father with Kitty’s kids, and the mother is a Chihuahua from a terrible place around Barcelona where gypsies could not control breeding!

The first one which they threw out, was Sol, Kitty’s daughter, because she was paralized.

I returned for two other dogs one of which, a Chihuahua, died in the car on the way to the clinic.
They simply had her dry out, she was starved, they did not give her any food or water, and she died of dehydration .

She licked my hand before she died, saying “thank you” for loving her, because I did. Her name was Millie. I buried her with my own dogs at the most beautiful place I could find right under a palm tree at a wall in between two fields where the dogs always loved to rest.

Now they can stay there forever; although at the same time in my heart.

The other little dog was one of Kitty’s kids which was very sick and very sweet. I called him Faraón and he had to die as well. The vet could not save him any more.

Then I took out all the other babies which were still there, one by one and all survived!
One was adopted by the vet of the boarding, but she has a good life.

The marvelous little one I called Bonbon, because he is, would have been adopted by everybody, but the vet wanted him also, so I gave him to her, especially because I did not want Kitty’s daughter to be without family.

They share the same father and the same heart, both are exceptionally generous beings, getting along with everybody.

Apart from that they are often with Kitty and her babies Romeo, Sol (who became totally healthy, nature healed itself!), Stups and Aida. Kitty only wants to stay with her babies, only then she is completely happy!

So are her kids. Kitty will never ever lose them as long as I am alive and can fight for them, because at the place of the gypsies they always took her babies away and Kitty got half crazy because of pain and sorrow.

She was very depressed and in panic every time I took one of the babies with me until I rescued h e r and her last baby, and she felt she was on her way to happiness.

Kitty and her kids turn up as well as Arielle and Simba in the books :LET´S GO! and PERFECT DARLING DOGS in English, as well as in DANACH… in German.

I also wrote a book in Spanish for charity. It is about cats, but all the books help the pack of dogs and the pack of cats which escaped the Mexican Mafia, and more Spanish animals which were saved from death and are happy now!

Do not forget to recommend all the books wherever you can on your websites, facebook, wherever on social media, to taxi drivers, to your friends and enemies and whoever you meet, and save lives with me! Every word about them, spoken and written, is important!

Thank you so much!